Science Fiction with Women as Aliens

Science Fiction with Women as Aliens

The concept of women as aliens in science fiction has a long history. Perhaps the most illustrative example in modern times is the US’ NBC TV two-part miniseries, V (May 1st-2nd, 1983), starring actress Jane Badler as Diana, supreme commander of the ‘Visitors’, who’re aliens that arrive on planet Earth in 50 ‘motherships’ offering advanced technology in exchange for aid: ‘We have come in peace, to all mankind. Our planet is the fourth in distance from the star you call Sirius, some 8.7 light years from Earth. This is the first time we have left our system, and you the first intelligent life we've encountered. We're pleased to meet you. We have come on behalf of our great Leader, him who governs our united planet with benevolence and wisdom. We have come because we need your help. Our planet is in serious environmental difficulty, far far worse than yours, it's reached the stage where we will be unable to survive without immediate assistance. There are certain chemicals and compounds which we must manufacture, which alone can save our struggling civilization. And you can help us manufacture these and in return, we will gladly share with you the fruits of our knowledge.’1 Their sojourn for most viewers was characterized by the pulchritudinous bodies of the women, contrasted with their ability to swallow quite large animals, which visibly distended their throats before their prey was digested by the reptilian ‘guests’, whose human-like appearance is a façade of thin, synthetic skin. Behind human-eye contact lenses, are carnivorous reptilian humanoids with horned foreheads and green, scaly skin. 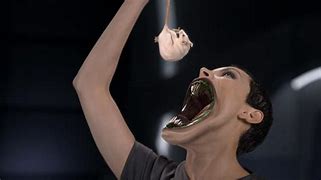 In mockery of religion Diana’s mind-control is described as ‘conversion’, used as a means to make it easier for the Visitors to harvest the human race as food; leaving only a few as slaves and ‘cannon fodder’ for their entertainment in war with other races. Although the plot seems typical of the nation states of the Earth’s preoccupation with being invaded, as the world once again recognized, when President Vladimir Putin’s Russian Federation invaded the Ukraine on March 24th, 2022, the nature of women is as a species separate from men, because their futanarian race of women’s seed with their own penis’ semen is capable of sexually reproducing their own brains’ powers, so alien invasion movies in science fiction are both propaganda against women as aliens and a means of disguising what maliens do. 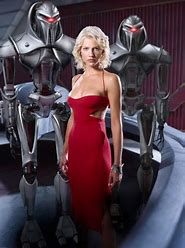 In the science fiction series aired first on US’ ABC TV, Battlestar Galactica (1978-79), a fleet of 220 ships, representing ‘The Twelve Colonies of Mankind’, is in search of a new home, legendary Earth and the mythic thirteenth tribe, after a thousand-year long war with the Cylons, ‘warrior robots’ created by a long since extinct race of reptilians wiped out by their own creations. Although it seems like a straightforward space opera, which is a term used to describe the SF equivalent of a sword and sorcery fantasy, like Star Wars, for example, with its Princess Leia and evil black knight, Darth Vader, in the later episodes of the franchised NBC’s Syfy channel TV miniseries, Battlestar Galactica (December 8th-9th, 2003), the Cylons are reconstructed to look like beautiful women. ‘Number Six’, for example, is actress Tricia Helfer, who’s produced as a model copied multiply; an allusion to women’s mode of sexual reproduction: a model that copies itself to multiply. In the NBC TV series, Battlestar  Galactica (2004), actress Grace Park is, for example, ‘Number Eight’, Lieutenant Junior Grade,  Sharon ‘Boomer’ Valerii, Raptor pilot, and copy of # 8, and (LTJG) Sharon ‘Athena’ Agathon, also a copy of # 8, and a Raptor pilot, who in Season 2, Episode 1 (14), ‘Scattered’, explains what happens when Cylons die, after Number Six is killed: ‘Her consciousness is being downloaded into another body right now.’2 Although the function of sexual reproduction is here elided, it’s difficult to ignore the implication, which is that women of science and technology don’t need men, while the denying of women access to technology is largely prevented by denying their futanarian species the sexual reproduction of their own capacity for thinking and doing. 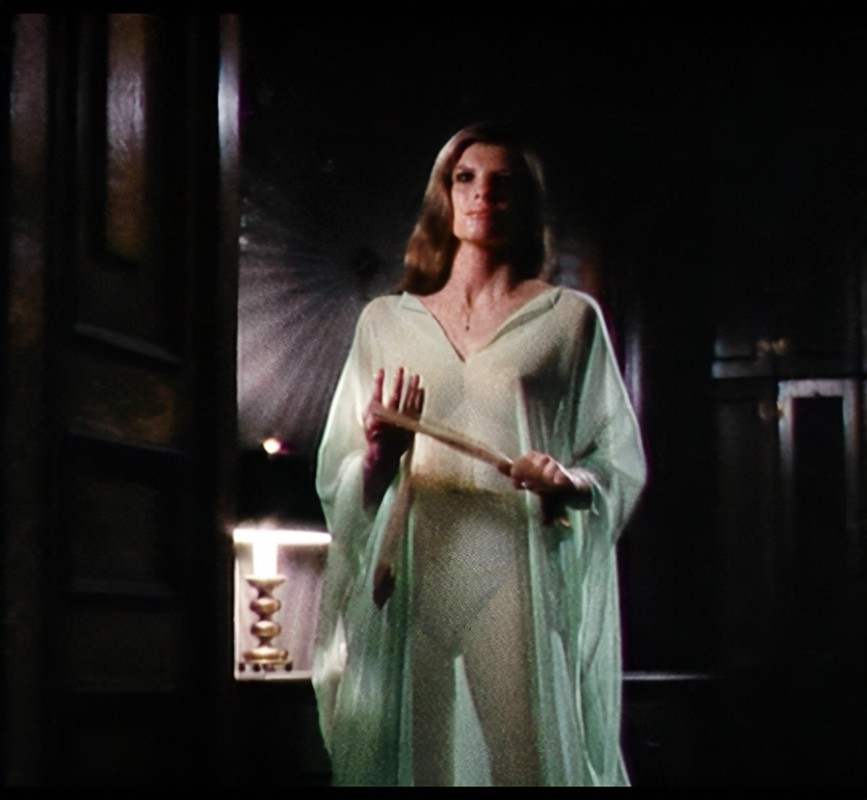 The plot device of copied women is familiar to movie watchers from The Stepford Wives (1975), starring actress Katherine Ross as Joanna Eberhart, a woman who moves with her family from Manhattan island, New York city, to the suburb of Stepford in idyllic Fairfield County, US’ state of Connecticut. As the women are replaced by men who’re unsatisfied with the real woman they’d married, so more malleable, responsive to their whims, models are constructed: ‘If I am wrong, I'm insane... but if I'm right, it's even worse than if I was wrong.’3 The idea of cloning is implicit in Joanna’s expressing the impressions of her disturbed mind, which represents not only dehumanization, but copyright infringement, for example, actress Tricia Helfer might exist in the past for those who travel through time. However, for those who don’t, the Tricia they know is the only model. Moreover, proponents of cloning seem advocates of copyright infringement, that is, a Tricia Helfer, who’s diluted in economic terms by other Tricia Helfers, would suffer economically, unless she was professionally managed as a multiple personality, which is a term used by psychiatry in the diagnosis of schizophrenia.

Diagnosing women as schizophrenic because they reproduce with each other, and therefore constitute a multiple personality, which isn’t of the collective ‘men’, doesn’t infringe copyright, although men do represent economic dilution. The hypothetical Tricia Helfer species can’t achieve economic independence, if a single Tricia Helfer raises copyright issues, because that reduces her to a single economy, irrespective of whether she’s married, or has a ‘significant other’. Multiple personalities are what economic success for women is dependent on, whereas what men evince in their sociopathic behavior is a single minded psychopathology determined to leech like a vampire, as in V, off the blood of the human race.

While most people accept time travel as science fiction, a futanarian Tricia Helfer could produce herself alone simply by bending her penis into her vagina to self-fertilize her ova, with the resultant girl child a self-copy, that is, Tricia # 2, and such a copying of the original material can be done at any stage of maturity, that is, the possibility of a futa Tricia Helfer reproducing herself is dependent only on the time available to her for pregnancy. As a species, women’s concern isn’t with copyright at all; it’s with progress for their race to colonize the planets amongst the stars, which requires machine technology, rather than biological reproduction. Here Battlestar Galactica reaches its zenith with the humanoid Cylons and the humans arriving on Earth having begun to interbreed, so presenting theirs as ancient Earth history, while neatly eliding men’s extinction of women and the human race’s economic enslavement beneath the heel of their vampire. 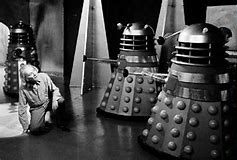 The United Kingdom’s version of men as a metaphor for the exterminator of the human race is to be found in BBC TV’s Doctor Who (1963-) with aliens represented severally, but most noticeably, and repeatedly, since the second serial,4 by The Daleks (December 21st, 1963, to February 1st, 1964) in the form of the aliens of the planet Skaro, which originally had two races; the dark haired Kaleds and the blonde Thals. Though several other actors have since been in the role of the Doctor over the series’ long run, actor William Hartnell, arriving on Skaro inside his Tardis, a time-machine and spacecraft, discovers the Thals defeated in a nuclear conflict, which almost destroys the Kaleds, who’ve built themselves metal containers, resembling pepper pots, for their radiation damaged forms. These ‘Daleks’, an anagram of their creators, the Kaleds, continue their war of extermination and became the rulers of Skaro before leaving to begin building an Empire of planets in thrall. With his usually more than beautiful ‘assistant’, the Doctor represents the fiction that women and men don’t reproduce in TV, because they’re a single male brained creature wearing each other’s clothes in transvestism for TV wars, which is what children are taught; the Dalek characters’ pogrom as edutainment. Moreover, as women aren’t depicted as being able to sexually reproduce with each other in mass media edutainment and news, wars against women’s seed, that is, humans, is all men prepare for; abusing their daughters and killing the women as aliens.