As Osama Ben Laden was ’the first beast’ of Revelation, Vlad Putin was ’the second’, according to logical assessment of Jesus’ disciple John’s apocalyptic vision of the future, ‘A great sign appeared in heaven: a woman clothed with the sun, with the moon under her feet and a crown of twelve stars on her head.’ (Rev: 12. 1) The woman is the European Union, which flag is comprised of twelve stars. When President Vladimir Putin of the communist Russian Federation ordered the Red Army to invade the Ukraine, an applicant for membership in the European Union of nations, he corresponded to the red dragon of Revelation, ‘The dragon stood before the woman who was about to give birth so that it might devour her child the moment it was born.’ (Rev: 12. 4) The 21st century had begun with the hijacking of civil airliners by the Moslem extreme terror group, Al Qaeda, ‘the base’, led by Osama Ben Laden, a Saudi Arabian heir to a civil engineering business. Operating under the auspices of the notoriously misogynist Moslem Taliban regime of Afghanistan, Al Qaeda crashed planes hijacked at Boston, Logan airport, into the Twin Towers of the World Trade Center on Manhattan island, New York city, New York state, in the United States of America on September 11th, 2001, while planes also penetrated a wall of the Defense Department building, the Pentagon, at Arlington, Virginia state, while a fourth plane, reputedly on its way to Washington D.C., and the White House residence of President George W. Bush Jnr, was brought down by irate passengers over a field in Stonycreek Township, near Shanksville, Pennsylvania state.

The events of 9/11, broadcast ‘live on TV’, were ‘the first beast’, ‘The second beast was empowered to give life to the image of the first beast so that it could speak, and could cause all those who did not worship the image of the beast to be killed.’ (Rev: 13. 15) The beasts are war. As TV is a communications’ medium that spreads news of conflict, it gives life to war, which otherwise would die for the people’s lack of interest in it, for example, the US’ science fiction TV series, V (1984-85), starring actress Jane Badler as Supreme Commander of the ‘Visitors’, depicted an invasion of Earth by carnivorous alien reptiles, which precipitated the reemergence of a dangerously alien idea. Putin was President of Russia in August 1999, and the ‘red dragon’ hadn’t relinquished power there when the Red Army invaded the Ukraine with its heavy flamethrower system, TOS (TOC), on February 24th, 2022. When the Russians withdrew from Afghanistan in 1989, because of their failure to defeat the Taliban there, during the Soviet-Afghan war (1979-89), it was part of a much wider retreat from territories captured and made satellite client states after the Second World War (1939-45) to defeat German ambitions to enslave the world, which had begun in 1991, when the former Union of Soviet Socialist Republics (USSR) collapsed, resulting in the initial forming of a Commonwealth of Independent States (CIS), consisting of Russia, Byelorussia, and the Ukraine, before the reestablishment of communist Russia as the Russian Federation. 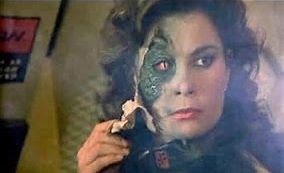 Russia’s retreat from Afghanistan directly contributed to Al Qaeda’s being able to use the region as a base for the attack on the United States, while the pipe bombing of the Boston Marathon in the US on April 15th, 2013, by Moslem extremists, brothers Dzhokhar and Tamerlan Tsarnaev, owing allegiance to the North Caucasus of Eastern Europe’s Russian Republic of Chechnya, near the Caspian sea, was a political ‘protest’ directly attributable to Russia’s wars there against Chechen ‘rebels’. Although both 9/11 and 4/15 were attributable to interpretations of William F. Nolan’s novel, Logan’s Run (1967), where a society with scarce resources, unable to maintain an aging population, produced ‘runners’ killed by ‘sandmen’, because they’d run out of time, and it was their turn to be killed, the hijackings at Boston Logan, and the runners in the Boston race, were symptoms of a much broader attack on the human race, ‘Did you ever see anybody renew?’1

John was the disciple of Jesus ‘Christ’, ‘the chosen’, born of his mother, the Virgin Mary, so women’s seed, whose teaching was the basis of the Christian New Testament believed by them to supersede the Old Testament of the Jews, that is, the history and law, which is their Torah and Talmud, ‘Love your neighbor as you love yourself.’ (Mk: 12. 31) Taken to the hill of Calvary outside the city of Jerusalem in Roman occupied Jewish Palestine, Jesus was nailed to a cross of wood where he died, but he experienced Resurrection and Ascension to heaven in prefiguration of that of women’s seed. That is evident from his betrayal by the disciple, Judas, who finding Jesus with a woman anointing him with the expensive perfume, spikenard, protested that it be sold to raise money. Jesus, however, demurred, ‘Leave her alone.’ (Mk: 14. 6) Judas’ response was to sell Jesus for ‘thirty pieces of silver’ to the Jewish religious police, the Pharisees, although it isn’t clear that Jesus’ crime was to have been with a woman.

As women are the human futanarian species, that is, they’ve penis’ semen of their own race for the sexual reproduction of their own brains’ powers to free them from the host womb slavery of men in parasitism, they’re the futa race, which slavery doesn’t want to run, ‘The dragon was wroth with the woman and went to wage war on the remnant of her seed.’ (Rev: 12. 17) While homosexuality for pederasty is more carefully documented as being institutionalized in ancient Greece, along with host womb slavery of women, it isn’t clear to everyone that’s war against the human system. Because of women’s capacity to sexually reproduce exponentially, that is, a single woman’s penis’ semen could fertilize all of the others, and they’re ring slaves to men, while biologically they don’t marry, they’re the equivalent of Nolan’s ‘runners’ trying to escape his ‘sandmen’, who kill them to conserve the society’s resources in Logan’s Run, which was made into an almost universally popular movie in 1976, starring English actor, Michael York, as former ‘sandman’, Logan 5, and actress, Jenny Agutter, as Jessica 6, who agree to ‘run’ together.

The delusion is that men and women do run together, whereas in fact they’re bred as a single male brained creature wearing each other’s clothes; a transvestite TV for the spreading of homosexuality in pederasty’s war to ensure that women’s seed don’t escape from host womb slavery in parasitism to their sterility. What’s missing from the picture disseminated by the capital of the movie industry situated in the Hollywood district of the city of Los Angeles on the west coast of the United States’ state of California, is women’s seed. Judeo-Christianity was founded by Abraham’s son, Isaac, born of wife Sara, while Islam was founded by Ishmael, the second son of Abraham by the concubine, Hajer, whose descendant, the Prophet Mohamed, received the Koran (610-30 C.E.) from the angels of God, according to the Moslem believers in Islam, which permitted four wives. Although Judeo-Christianity views the Koran as an attempt to legitimize Ishmael, and therefore Islam, the extended Islamic family affords the possibility for women’s seed to reproduce there, which is more legitimate than pretending the human futanarian race of women doesn’t exist.

Although the discovery of oil beneath the deserts of the Middle East had brought wealth to the nations of the Moslem believers in Islam, it also highlighted global population pressure on scarce resources in other parts of the world, that is, the Logan’s Run scenario, which formed the basis of war between Moslems, and between Islam and Judeo-Christianity. Concealed was the ‘secret war’ going on between men and women’s seed forced to accept marginalization. However, if the nations of the world accepted that women were the human species, they’d have to embrace the idea that any war was against the human race, which would mean the diversion of finances away from what the US calls the Military Industrial Complex (MIC) and into the development of spaceship technologies and medical rejuvenation facilities to ensure the escape of the futa race from the planet Earth to colonize the planets amongst the stars of heaven. Failure on the part of men to see that they war against human life per se will mean alien attacks until the species native to the Earth is extinct.