Homepage > Jesus is a Sinner to the Jews

Jesus is a Sinner to the Jews

Jesus is a Sinner to the Jews

The Jewish ‘place of worship’ is a Synagogue, while ‘demagogue’ in the English language is the appeal to ordinary people that a persuasive orator has, that is, a Christian church is where sinners go to hear an oration, which has as its goal the conversion of the sinner to accepting the orator’s words, based as they are on the Jewish Old Testament of the Judeo-Christian Bible, that is, the Torah and Talmud, which is the law and history of the Jews, and the New Testament teaching of Jesus ‘Christ’, ‘the chosen’ Messiah, who is believed by Christianity to have superseded Old Testament law in his exhortation, ‘Love your neighbor as you love yourself.’ (Mk: 12. 31) Taken to the hill of Calvary outside the city of Jerusalem in Jewish Palestine, which was then occupied by the Romans during the period of the Emperor Tiberius Caesar Augustus (14-37 C.E.), where he was nailed to a cross of wood and died there, before experiencing Resurrection and Ascension to heaven, Jesus was a Jewish sinner.

Jesus’ sin is clearly documented. Born of his mother, the Virgin Mary, in Christian iconography she is depicted as crushing the head of the serpent, Satan, with her foot, that is, Jesus’ teaching is her foot, but also the foot of her antecedent Eve who, in the book of Genesis in the Old Testament, is described as accepting from the angel, Satan, turned into a serpent for rejecting God’s plan that the human host be greater than the angelic, ‘the fruit of the tree of the knowledge of good and evil’, which it was death to taste, because Satan told her, ‘You shall be as gods.’ (Gen: 3. 5) God expelled Eve and Adam from the garden of paradise, Eden, for rejecting the ‘fruit of the tree of life’, which was immortality, although God told Eve her ‘seed’ would have Redemption: ‘You shall crush the head of the serpent with your foot, but he will bruise your heel.’ (Gen: 3. 15) As Jesus was the ‘foot’ of Mary, he was also the ‘foot’ of Eve, because women’s seed have their own penis’ semen as futanarian or futa, so they can reproduce sexually without men, who after Satan represent the parasitical enslavement of the human host womb, which is their sin.

Jesus’ role as the redeemer from sin is because he isn’t a sinner. Born from his mother, the Virgin Mary, without male semen, he’s a member of the human futa race of women’s seed, for example, when a woman was accused of adultery, Jesus said, ‘Let he who is without sin cast the first stone.’ (John: 8. 7) None could, because they were ordinary sinners beset by an orator, that is, demagoguery masquerading as rabbinical teaching, while Jesus, as a rabbi, was able to perceive that women’s seed was adulterated by men’s, so women couldn’t be adulterated, because humanity constituted the species of man, which was separate from men, as it was women’s.

Before Jesus’ Resurrection and Ascension to heaven in prefiguration of that of women’s seed, Jesus was entombed behind a stone that was mysteriously rolled away so as not to hamper the Ascension of Jesus after his Resurrection. For students of zoology, Jesus body had been lain inside the demesne of a trap door spider, that is, a ctenizidae, which sounds like ‘sinner die’ when pronounced, because Jesus was perceived by Judaism as a sinner. It was Jesus’ disciple, Judas, who found him alone with a woman anointing the Messiah with the expensive perfume, ‘spikenard’, and it was Judas’ spy canard that Jesus wouldn’t share the perfume with the disciples by selling it for money, so he took ‘thirty pieces of silver’ from the Jewish religious police, the Pharisees, to betray him for being alone with a woman, which was Jesus’ supposed crime, and despite his only mildly rebuking Judas with the words, ‘Leave her alone.’ (Mk: 14. 6) Judas was a spy accusing Jesus of being a ‘sinner’, and the Jews response was to entomb him with a ctenizidae, that is, a trap door spider, which would drag him down into hell for revealing that Judaism was Satanism; insofar as it enslaved the human host womb in adultery: masquerading as human love.

The peculiarity of trap door spiders is that their webs are tubular, while the story of Jesus’ crucifixion is of a puppet with holes in its hands and feet, after being nailed to the cross of the puppeteer’s ‘control’, so that the puppet can be strung upon the strands of the web of a different category, that is, genus, of spider family: men’s. The synagogue of Judaism is the place where the ordinary sinners, that is, the ctenizidae, go to worship God and pray for forgiveness for their sinful nature, because they don’t want to go to hell, so they don’t want to drag others down through their sinners’ tubes, which means they should accept Jesus’ Holy Spirit into their lives.

The Holy Spirit of Christianity corresponds to the Shekinah of Judaism, that is, ‘the feminine spirit of God’, who’s depicted as dwelling within the tent of the tabernacle, during the Jews exodus from slavery to the Egyptian Pharaoh Thutmose III (1485-1431) on their way to Palestine: the land promised by God. She represents the ‘foot’ of God also, whereas Jesus’ puppeteer, Satan, and the unrepentant ordinary citizens, that is, the ctenizidae, represent the evil toying with their food.

The tubes of the sinners correlate with cigarette smoking, because smoking per se is correlated with fellatio as well as barbecue, that is, homosexuality is the perception that humans are for smoking as barbecue meat, so fellating the remnant of women’s seed and skewering its anus on their penis is how the evil prepare a meal: ‘The dragon was wroth with the woman and went to wage war on the remnant of her seed.’ (Rev: 12. 17) Jesus’ disciple John in his apocalyptic vision of the future, Revelation, descried how the human race was dragged upon, like a smoked cigarette: ‘The dragon stood before the woman, who was about to give birth, so that it might devour her child the moment it was born.’ (Rev: 12. 4) The draco is the type of homosexuality, for example, the ancient Greeks in their wars with the Persian Empire of Darius (499-449 B.C.) institutionalized homosexuality in pederasty; together with host womb enslavement of women, because war is alien to women’s seed, as it’s the devourer of the human futa race.

In the 21st century the type of biological attack was the SARS virus, that is, severe acute respiratory syndrome, which effectively knocked all of the air out of the lungs in the same way as the two-stage Russian heavy flamethrower system (TOS 1) when deployed by Vlad, ‘dragon’, Putin in the invasion of the Ukraine on February 24th, 2022. SARS was a global epidemic riding on the back of a more selective ‘incurable killer disease’, HIV/AIDS, discovered in the Russian Republic of the Congo in 1983 as a variant of the simian immune deficiency virus (SIV), transmitted between homosexuals as the human immune deficiency virus (HIV), resulting in acquired immune deficiency syndrome (AIDS), collapse of the organs, for example, the lungs, and ultimately brain death.

The most virulent form of SARS was ‘discovered’ by the dragon of Chinese Communism in a city hospital, Wuhan, Hubei province, in December 2019, while its progress as a global epidemic was viewed by science as attributable to a weakening of the human system by AIDS. Characterized by flatulence, SARS was a ‘biological weapon’ similar to the Russian TOS. The spraying of a flammable vapor by the farter being the result of penetration of the human defense system by the AIDS virus through the anus by homosexuals with infected penis’ semen ejaculate. The missiles, launched by the Russian TOS 1 to ignite the first stage flammable vapor of the HFS (heavy flamethrower system), so causing a vacuum in which the lungs collapsed for lack of air, coincided with the virus of hell through the farting of an infectious homosexual humor. 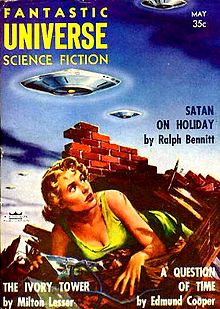 The science fiction predecessor to the tragedy of humanity in the late 20th and early 21st century was Isaac Asimov’s ‘Hell-Fire’ (1956), a short story in which journalist, Alvin Horner, interviewing a scientist, Joseph Vincenzo, is told nuclear bombs are ‘hellfire’.1 The letting off of an A-bomb at Los Alamos is followed by a slow motion film replay of the harnessing of the power of the sun, ‘divided into billionth second snaps’. The face of Satan can be clearly seen laughing evilly before the mushroom cloud, signaling possible future holocaust, blossoms like cancer. The virus clearly intended for it to have a nice stay.