John Wyndham`s Midwich Cuckoos (1957) was a novel about children born inside a village in the fictional county of Winshire where the people inside a 2 mile hemisphere mysteriously become unconscious. Aerial photographs reveal a silver object, but the affect disappears along with the object after the `Dayout`. When the village awakens, the women of child-bearing age discover they`re pregnant. With golden eyes and silvery skin, 31 boys and 30 girls are born who`re telepathic coercives that can control others` actions. `The Children`, as they are known, have distinct boy and girl `group minds` suggesting that boys and girls aren`t the same. A man who accidentally hits a `Child` while driving is coerced telepathically to drive into a wall and kill himself. The villagers try to burn down Midwich Grange, where the Children are taught and live, but the Children telepathically coerce the villagers to attack each other. The Children `phenomenon` has occurred also in an Inuit settlement in the Canadian Arctic, a township in Australia's Northern Territory, a Mongolian village, and the town of Gizhinsk in eastern Russia, northeast of Okhotsk. The Inuit killed the newborn Children, sensing they were not their own, and the Mongolians killed the Children and their mothers. The Australian babies all died within a few weeks, suggesting something went wrong with their xenogenesis. The town Gizhinsk was `accidentally` destroyed by the Russian government using an `atomic cannon` from 50–60 miles away. Midwich resident, Gordon Zellaby, acts as a teacher and mentor of the Children, who regard him with as much affection as they can have for any human, permitting him to approach them more closely than they allow others to, so he hides a bomb in some projection equipment he takes to show them a film about Greece; and he and they are all killed: because that`s what fathers do. They force the women to have children, so they can accuse the children of being interested in adult things, which is what pedophiles do. Because women have penis` semen of their own as futanarian women, women are the single separate unmarrying human species, which is why Wyndham`s boys and girls have distinctly separate `group minds`. Forced to bear Children by men`s xenogenesis, the women`s host womb is enslaved by their parasite. As parasites that emerge to kill the host are termed `parasitoid` by parasitologists, that`s what men are. Consequently, the Midwich Cuckoos is a description of the parasitoid father, who feigns relations with the human host and its progeny in order to extinguish it. 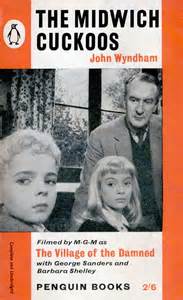 Midwich Cuckoos was filmed as Village Of The Damned (1960), which is more explicit in that actor George Sanders as Gordon Zellaby, along with the rest of the Children, kills his own son, David: `You have to be taught to leave us alone.`1 In the film sequel, Children Of The Damned (1964), six Children are discovered by a United Nations Education and Science Organization (UNESCO) team of researchers investigating child development. British psychologist Tom Lewellin (Ian Hendry), and geneticist David Neville (Alan Badel), are studying Paul, a boy from London, whose mother, Diana (Sheila Allen), thinks it important to insist she`s a virgin, like Jesus` mother, Mary, who bore `Christ`, `the chosen`, uncontaminated by male semen, because Jesus` Resurrection and Ascension after crucifixion by the Romans prefigures that of `woman`s seed` to the stars. Unlike Mary, Diana hates her `Child`, because she`s the product of later generations bereft of `woman`s seed`, and manufactured as a single male brained creature wearing each others` clothes in `TV` transvestism for the `broadcasting` of the wars waged by the parasitoid fathers against their children, who don`t understand that they`re destroyed when they`re adults because it`s entertaining for their parents. In the novel by Wyndham, Midwich Cuckoos, it`s important that it`s a film about Greece that the Children are watching when Zellaby kills them and himself with a bomb, because ancient Greece is where homosexuality in pederasty for war through host womb enslavement of women was institutionalized. Lauded for being the `model of democracy`, Greece is actually the `beast` of Jesus` disciple John`s prophetic Revelation of the future: `Let he that has wisdom have understanding. The number of the beast is the number of a man, and his number is six hundred three score and six.` (Rev: 13. 8) Without `woman`s seed`, parasitoid democracy is 66.6% of the vote and homosexual, which is why Diana hates her `Child`, Paul, because `TV` women are parasitoid too.

In Children Of The Damned, the Children, from China, India, Nigeria, Russia, the United States of America, and Britain are brought to London, England, for a collective study into their advanced intelligence, but escape from their embassies and gather at an abandoned church in Southwark, London. They telekinetically build a machine to kill using sound waves. Realizing the Children only defend when attacked, the military allow psychologist, Tom Lewellin, to persuade the group to return to their embassies. In response to their respective nations` seeking to enslave what has been revealed as valuable mental power, the Children kill embassy and military officials before returning to the church. Lewellin`s team notice differences between ordinary human blood cells and the Children`s. It`s implied that the Children are non-human, so a threat to the human race, as Jesus` threat was perceived by Judas, who saw him with a woman, and was worried that Jesus might reproduce, so gave him over to the Romans for execution as a `dissident` preaching acceptance of `woman`s seed`: `Love your neighbor as you love yourself.` (Mk: 12. 31) If `woman`s seed` reproduced, she`d escape slavery to the `fatherly` parasitoid. Consequently, scientific opinion shifts in Children Of The Damned to include the possibility that the cells of the Children are evolultionarily advanced. However, the Children, seemingly having decided their presence is incompatible with basic humanity, intend to lower their defenses to sacrifice themselves. In other words, basic humanity is parasitoid and seeks their deaths; as it sought Jesus`. Although the military attempt to abort the attack, the church is destroyed, and the children are killed. Having ascertained that the Children aren`t basic human adults, they`re killed, which is what pedophile child abusers do. The minds of children evincing signs of being adult are killed by parasitoid society, because it doesn`t want more adult minds. Moreover, if there weren`t children, there wouldn`t be any for their fathers to accuse, so it`s in the interests of the pedophile child abuser that there aren`t any more adults, who mightn`t want to accuse their children of disobedience in order to torture them to death, like Jesus, as `dissident` humanity. The Children in Children Of The Damned are accused of being alien, because it`s an alien child abuser that`s abusing them, and as experts in child abuse know, the way to persuade a child to accept abuse is to pretend that it`s evil. Or, in other words, the alien pretends that the human is alien, which the child`s mind is young enough to be conditioned to believe. As humans are individually born into ignorant ephemeral unconsciousness, it`s not in the interests of the pedophile child abuser that adults are immortal, so medical science is prevented from developing in slavery. By preventing `woman`s seed` from producing human brainpower that would confer adult immortality through science, the human race remains childlike and abused by the pedophiles, who accuse it of being interested in its own mode of sexual reproduction, for example, and is the reason for the absence of humans in the mass media, that is, futanarian women alongside the women of their human race. 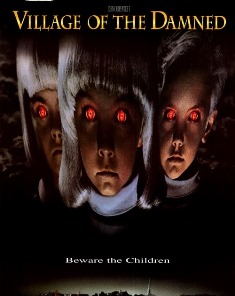 In the film remake of Village Of The Damned (1995), the children `pair off`, except for David, whose intended partner was stillborn. As a seeming result, he shows human compassion, whereas the others don`t. Their leader is Mara (Lindsey Haun), daughter of local physician, Dr Alan Chaffee (Christopher Reeve): Mara Chaffee: `If we coexist, we shall dominate you. That is inevitable. Eventually you will try to eliminate us.`2 Mara's mother, Barbara, commits suicide by walking off an ocean cliff in a scene reminiscent of Jesus` meeting with a man possessed by demons: `I am Legion.` (John: 8. 7) Cast out from the man by Jesus, Legion asks to enter a herd of pigs, and they run off a cliff`s edge and drown, because that`s what humans possessed by the parasitoid alien collective do. In short, Barbara is parasitoidally possessed, whereas the Children are fighting for independence from it. Because of the childhood loss of his partner, David and his mother, Jill McGowan (Linda Kozlowski), share grief over Barbara`s suicide. Scientist, Susan Verner (Kirstie Alley), produces David`s stillborn partner, which she`d kept to perform an autopsy. She reveals it as `alien`. The Children are upset by the child abuser`s accusing them of being alien, which is a standard device used to persuade children to accept abuse. The Children use their mental powers to have Susan stab herself fatally. When the villagers try to kill the Children, their leader is set afire. He burns to death. The state police, who are sent there, are telepathically coerced into shooting each other. Chaffee kills the Children with the bomb in the classroom, but Jill helps David to escape, which symbolizes how the human host womb bereft of `woman`s seed` is duped by the natural desire to rear a child into accepting the `seed` of its parasitoid host womb enslaver. David looks emotionlessly distant as his mother, Jill, drives him emotionally away in a car, because he`s human, while she`s bred to accept parasitoid nature. The pedophiles will continue to try to kill him presumably; to prevent his becoming an adult: because that`s how they maintain their slavers` system. Innocent, the `Child`, can be abused, so the alien parasitoid abuser defends itself by ensuring children remain ephemeral, and ignorant; until death brings release from tortured enslavement. All inquiring minds are targets; so women`s cocks are out.

1 Stephens, Martin as David Zellaby, Village Of The Damned, MGM, 1960.